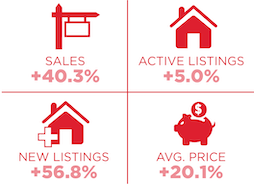 August sales on TRREB were 10,775. This represented a 40% increase over August of last year. Some are reading too much into these numbers, trying to explain a ‘pandemic real estate boom’. The real story can be found in the year-to-date sale numbers. Year-to-date sales are still 5% lower than the number for 2019.

Most experts and economists focus on the ’classic’ house price to rent or income ratios. There is lots to criticize with those stats. But instead, we want to focus on what really drives sales. It is the population base growth, marriages, divorces, kids, and deaths. There is no doubt that non-residents investing in Toronto can inflate our sales and 2016 with 113,000 sales speaks to that. Given the size of the GTA, sales should normalize around the 90,000 level. Our revised forecast for all of 2020 calls for sales of 85-87,000 units which is below the long-term average.

While the low-rise property market has shown continued strength, the condo market appears to be going in the opposite direction. Condo apartment sales were 2,286 in August of this year. August of 2019 produced 2,067 sales or an increase of 10% which looks encouraging but not close to the 40% of the overall market. Looking at the Downtown condo market, the increase this August over August of 2019 was similar at 11%.

AUGUST RESULTS FROM THE TORONTO REGIONAL REAL ESTATE BOARD (TRREB)

With this Report, we are again looking at a specific condo and our focus is Westlake, Phase II. Registered in 2015, the condo sits at the intersection of Park Lawn and Lake Shore. Beneath the condo are retail stores including a Metro and Shoppers Drug Mart. The condo consists of 434 units in 44 storeys.

In today’s market you can get either a five-year fixed rate or a five-year variable rate for about 2%. Most people equate a mortgage payment to a rent payment which cannot be further from the truth. At these interest rates your payments will start repaying 65% in principal and only 35% in interest. On a $500,000 condo with 5% down, your equity after five years would be just over $100,000 even if the condo never appreciated by one dollar! Can a renter save that amount of money?

Yes, the rental market is slower, but it is not dead! The Downtown and Humber Bay markets leased 1,436 condos in August. In August of last year, the number was 1,720. So, there are still people who want to live Downtown in a condo!

The mix of leased units in August consists of 100+ studios; almost 900 one -bedroom units, split evenly between those with and without a den; over 400 two-bedroom units; and 34 three- bedroom units. Rental rates are off 10-15% across the board.

The explanation is simple for lower rents. There are currently 6,700 units available for lease – a supply figure that will last into 2021, even if we get no more ‘new’ listings. Of those units available, 33% are showing as a ‘price change’ – downwards. Almost 100 show listing extensions and the rest are classified as ‘new’.