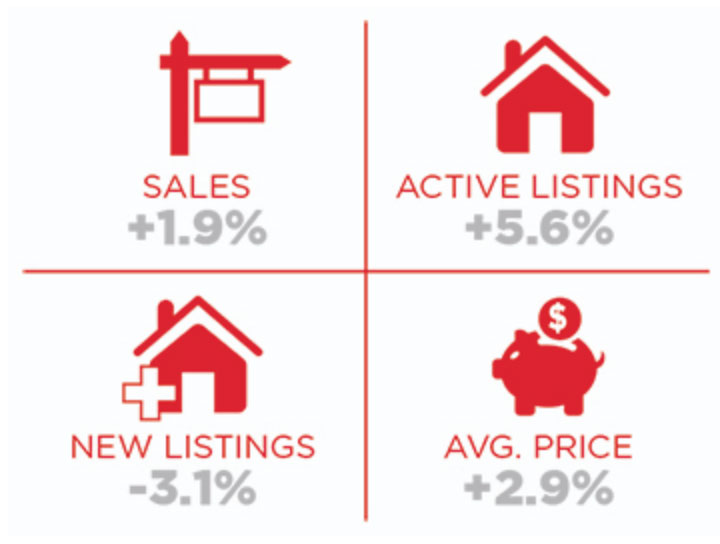 September sales on the Toronto Real estate Board were 6500 units, up 1.9% compared to September of last year. This is not as positive a sign as it appears. September sales were down 5% from August (very unusual). When you compare to last year, September sales were 1% higher than in August. The reality is that sales volumes will be mired at these levels until something fundamentally changes.

The good news is that ‘new’ listings for September are down by 3% over last September and that ‘active’ or total listings are only 5% higher than this time a year ago. This dynamic has kept price changes in a very narrow range. But within this market two trends are evident: last year the 416 area outperformed the 905, in terms of sales and prices. This year, lower prices are attracting more people to 905. The second trend is that condo sales in 416 was the only market segment where sales in September were lower than the previous September. This segment was down by 5%. Downtown condo sales were even lower at 8% versus September of 2017. On the other hand, Humber Bay condo sales were up by 15% from a year ago.

When you examine the downtown condo market, you find that both ‘new’ listings and ‘active’ listings are down 8% and 10% respectively from this time a year ago. Current listing supply in September is half of what it was back in 2014 and 2015. For 2017 and 2018, September’s ‘active’ listings were less than the ‘new’ listings for the month. When this happens, prices usually rise. Initially they did for the first four months of the year, but they have levelled off as the Government’s mortgage policies have chocked off the first-time buyer. So where have these potential listings been going? To the rental market where rents are rising at over 10% annually.

Against this back drop, Toronto has the fastest growing tech sector of any city in North America – the jobs and where these people want to live will be centered downtown! These high paying jobs will translate into more new buyers. Expect the demand for accommodation to only increase going forward. And with it, higher prices over the next few years. The current market pause provides a short-term opportunity for buyers. 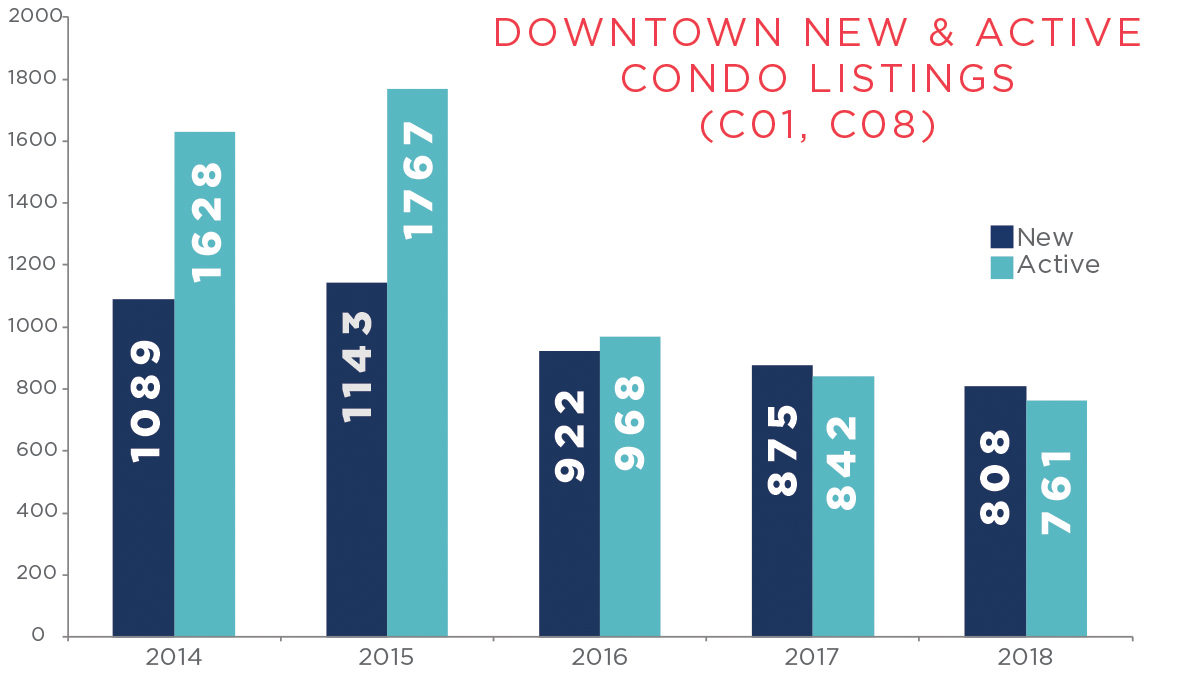 This graph compares ‘new’ to “active’ condo listings for downtown (C01,C08) Toronto. Note that when the number of ‘active’ listings drop below the number of ‘new’ listings, prices usually rise. Source: Toronto Real Estate Board 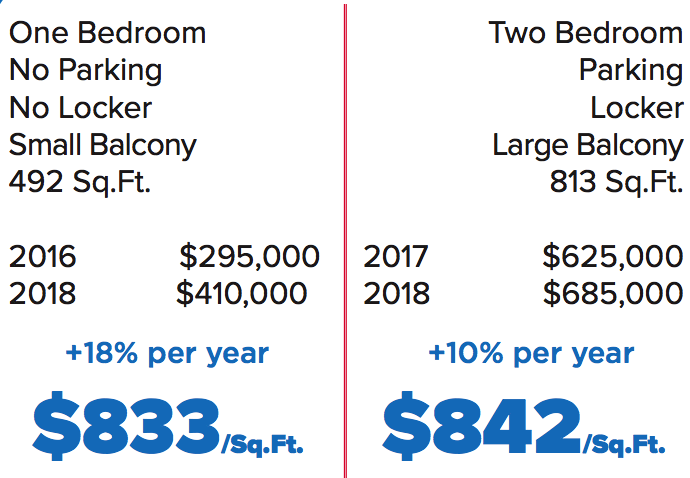 Located just west of Bathurst and south of the Gardiner expressway, this area was the slowest to respond to an overall increase in downtown condo prices. The 16 storey Neptune was one of the earlier buildings in the area and was registered in 2011. With access to the Fort York Historical Site and Park, and with a new Loblaws under construction at Bathurst and Lakeshore, the area has increased in popularity.

We looked first at a one- bedroom condo without parking or a locker. It does have a 30sf balcony. The unit sold in 2016 for $295,000. It sold again in September of this year for $410,000. That works out to an annual increase of 18%. At just 492sf, the price is $833/sf which is still slightly lower than the downtown average. The second unit we tracked was a two-bedroom, two bath, with parking and a large balcony. It sold in 2017 for $625,000 and again in 2018 for $685,000. That’s an increase of 10% in less than one year. At 813sf, the price is $842/sf. There are currently 289 units in the building with none available and two sold conditionally. This building is very close to the Gardiner and in any market slow down, these locations are usually the slowest to sell. The lack of listings is a clear indication of a tight market. 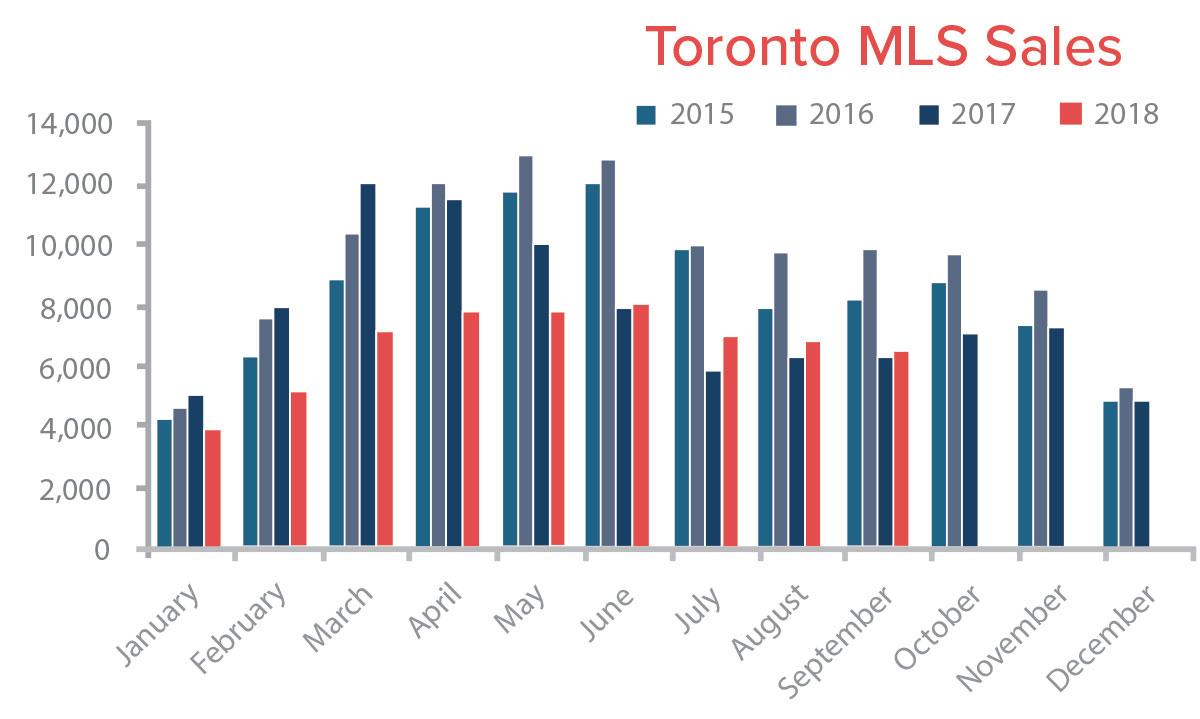 This chart plots monthly MLS® sales for the current year and the previous three years. The recurring seasonal trend can be examined along with comparisons to previous years for each month. Source: The Toronto Real Estate Board