One in three Canadians considering “workarounds” to buy a home amidst declining housing affordability in Canada, supply shortages

In a new report exploring housing affordability in Canada in 2021, RE/MAX found that one in three (33%) Canadian homebuyers is exploring alternative options to help them get a foot into the housing market. These include renting out a portion of a primary residence (21%), pooling finances with friends or family to purchase a home (13%) and living with like-minded neighbours in a co-op/shared living arrangement (7%).

According to a Leger survey commissioned by RE/MAX, 42% of Canadians said the high price of real estate was a barrier to entry into the market. This is up just 4% over last year – surprising, given the consistent price growth experienced by housing markets from coast to coast over the past year. Among prospective homebuyers, millennials and Gen Z are most likely to consider alternative regions and communities, and/or financing options to keep affordability in play.

“It’s promising to see Canadian buyers deploying their ingenuity to be able to buy a home, but we must address the urgency of the underlying housing affordability crisis in Canada, which is predominantly systemic,” says Elton Ash, Regional Executive Vice President, RE/MAX of Western Canada. “While we wait for a nationally and municipally supported housing strategy based on an aggressive goal to boost our national inventory of affordable housing, there are regions across the country, especially in Western Canada, that remain accessible to first-time buyers looking to break into the market.”

RE/MAX Canada analyzed house price to income ratio by city in Canada. Here’s how they ranked. 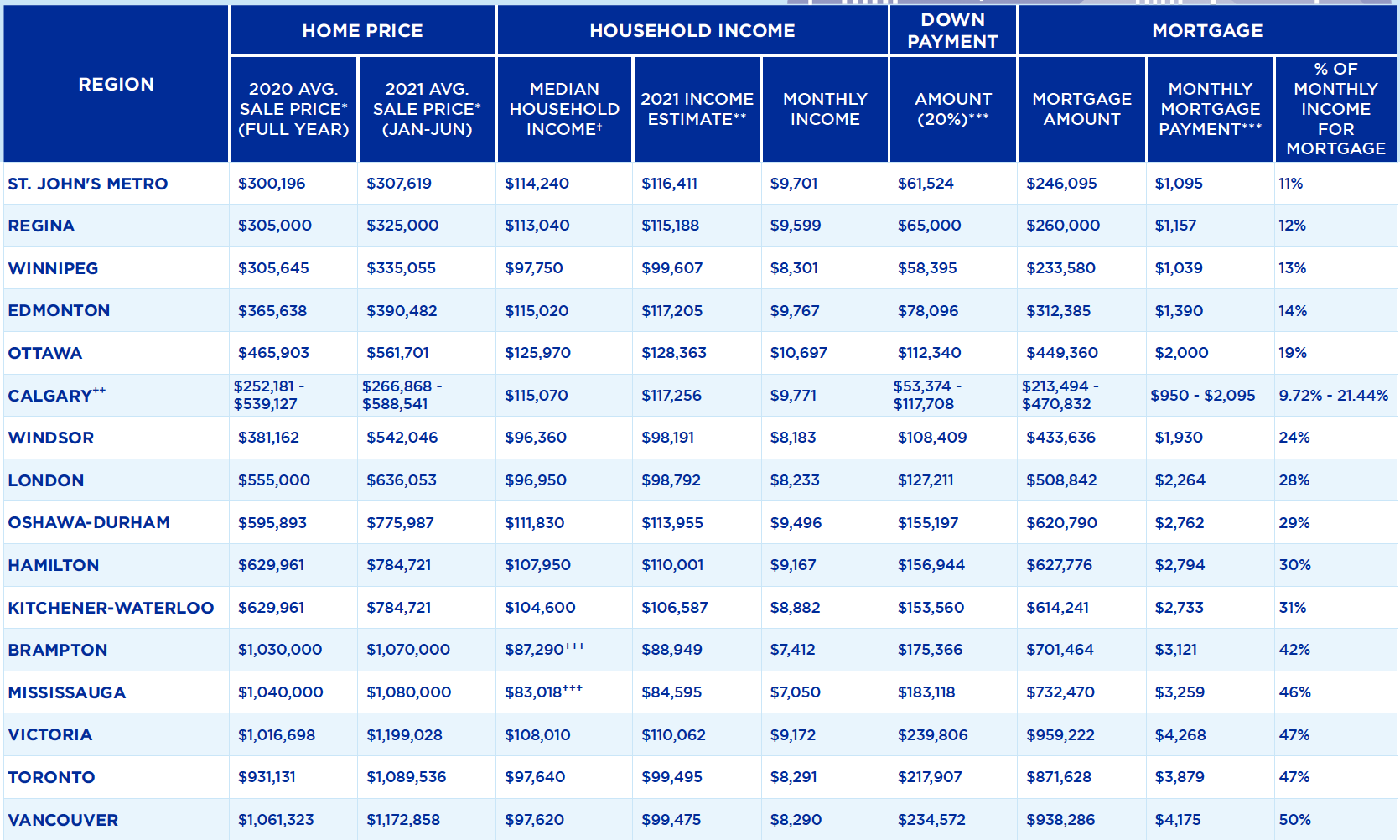 Canada’s two largest cities, Toronto and Vancouver, have struggled with significant housing affordability challenges, mainly due to low supply and high demand spurred on by low interest rates. Unsurprisingly, both cities have remained at the bottom of the list year-over-year when it comes to housing affordability in Canada. At the other end of the spectrum, St. John’s, NL has replaced Regina, SK as the most affordable Canadian city to buy a home in 2021.

TORONTO, has seen many first-time homebuyers in 2021 flock to single-detached homes, but condominiums remain the most affordable choice. Typically, buyers in Toronto are willing to push their budgets modestly to attain the home they desire. When it comes to factors that are influencing affordability in the region, low/declining housing supply, returning immigration numbers, and tightened lending rules are the most significant factors.

A popular trend in 2021 has been an influx of buyers moving to smaller towns outside of the city, including but not limited to Stratford, London and York Region neighbourhoods, because of the more affordable housing options found there. Some of the least affordable neighbourhoods in Toronto are High Park, The Junction and Bloor West.

Some alternatives to individual home ownership that have become relevant in Toronto since the start of 2021 include choosing to rent instead of buying, and using a portion of a newly purchased principal residence as an income property, to supplement the mortgage payments.

It is not expected that Toronto will see a cooling of house prices in the fall and winter of 2021, because of ongoing regional demand, continued limited supply, and the expectation that buyers will return to the city.

Most Affordable Neighbourhoods to Buy a Home

hort of exploring alternative solutions to find and achieve housing affordability in Canada, those who are willing to expand their boundaries can still find “hidden gem” neighbourhoods with homes at below-average prices. In a wider survey, RE/MAX Canada brokers and agents were asked to identify the most affordable neighbourhoods in the communities they serve. From approximately 300 survey submissions received between June 16 – 30,2021, some of the most affordable neighbourhoods topping the list include:

Meanwhile, in what are traditionally considered Canada’s most expensive cities to buy a home, this same survey also identified “relatively affordable” neighbourhoods where homes can be purchased at prices below the city-wide average. Some of these neighbourhoods include:

In an analysis of housing affordability in Canada, the RE/MAX 2021 Housing Affordability Report finds that: