Sales on the Toronto Real Estate Board were 7800+ units in May. In our last Report, we were forecasting 8900 units. So where did we go wrong? In a normal year, May and June are usually the largest sale months of the year and that was our expectation. We were also looking for sales in the 90,000 unit range for the year. Our guess now is that it will be 80-85,000 units. That number was last reached in 2010 when the population of the GTA was almost a million people less. The big question is why are people staying in their houses longer? The only answer seems to be that Government has made mortgage financing a whole lot more difficult. That’s not to say that owners are facing financial difficulty. In fact, ‘mortgages in arrears’ are at an all time low in Ontario and are 1/7th of that recorded in our last major market correction in 1990.

This last point leads into our discussion on prices. If sales are down, why aren’t prices starting to fall? In real estate, sellers have a preconditioned notion of what price they want. If they don’t get it, they just take their property off the market. They only reduce prices when they are forced to sell for financial reasons– which is not now. The media and casual observers tend to look at average prices because it is an easy number. But average prices assume that the mix of sales does not change over time. In 2018, we have seen a very strong market for low rise properties under a million, a neutral market between one million and two, and a soft market over two million. In the condo market, properties under $600,000 are the strongest segment, up to a million it is busy and slower over that mark. This is very different than in 2017 when bigger, more expensive properties were selling quickly up to May.

In the condo market, May sales were 15% lower than for May of 2017. In comparison, the total Board was down by 22% for the same period. For downtown condos, sales were 18% lower and in Humber Bay the number was 30% lower. In terms of prices, downtown condos have risen by 10% since the start of the year. However, we noted a change in mid -May. Prices and sales slowed even though listings increased. Sellers need to adjust their price expectations to that of a flat market.

Looking at preliminary sales for June, expect sales to be LOWER than in May. That applies to all market segments. Even downtown condo sales will be lower than for May. A new reality has set in. 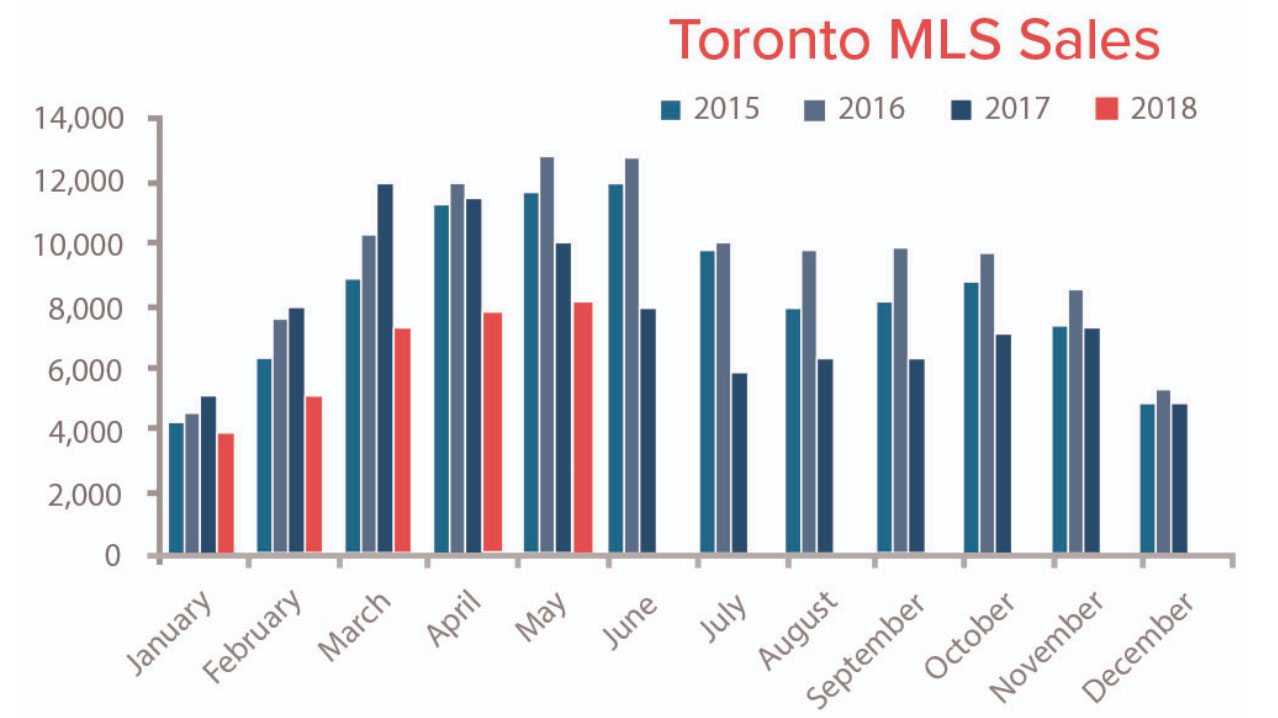 This chart plots monthly MLS® Sales for the current year and the previous three years. The recurring seasonal trend can be examined along with comparisions to previous years for each month. Source:The Toronto Real Estate Board