Sales on the Toronto Real Estate Board were 8,082 units in June. That was up 2.4% over June of last year (the first time this year) and more importantly up 4.3% from May. Remember we were expecting sales to be lower in June. The market turned upward again in the last 10 days of June. At the same time, ‘new’ listings in June were 19% lower than for June of last year and ‘active’ listings are now only 6% higher than a year ago at this time.

At the same time that sales were higher in total, condo sales for June were lower by 5.3% over June of last year and were down 6.6% from May. The downtown condo market produced similar results – down 5.2% from June a year ago and 6.9% from May.

So, what is the challenge facing the condo market? It is still a lack of ‘first time’ buyers which prevents ‘move up’ buyers. See our previous Report where we argued that getting buyers to qualify at the Government’s ‘posted’ rate instead of the five-year fixed rate is reducing what buyers can afford by almost a $100,000 and forcing more people to rent rather than buy. Bank of Canada Governor Poloz, justifying the policy, suggested people buy a smaller property. For first time buyers in Toronto that would be 400 sf. So how much smaller should they be looking at Mr. Poloz?

Yes, part of the problem is that condo prices have increased by 20% over the last two years. While prices in all markets are determined by demand versus supply, when you have a shortage of product (and we do need new condos to fill the gap), you have to look at the cost of this new supply to determine where prices are heading. The only reason why pre-construction sales are down this year is because there has been a lack of new projects. The ones that are selling out are in the $1100/sf range. At the end of last year over five (sold out) condo projects were cancelled because developers sold them at $600+ per sf and they cannot build at that price. Here’s why: development charges from the City are now $120. /sf. Land costs that used to be in the $100 range are now at $250 and building costs are up by about 25% (labour shortages and trade tariffs for reinforcing bar). The end result is that total costs are pushing $900/sf. So there seems little room for any price correction.

Note: A normal market should be about 100,000 sales annually
Source: Toronto Real Estate Board 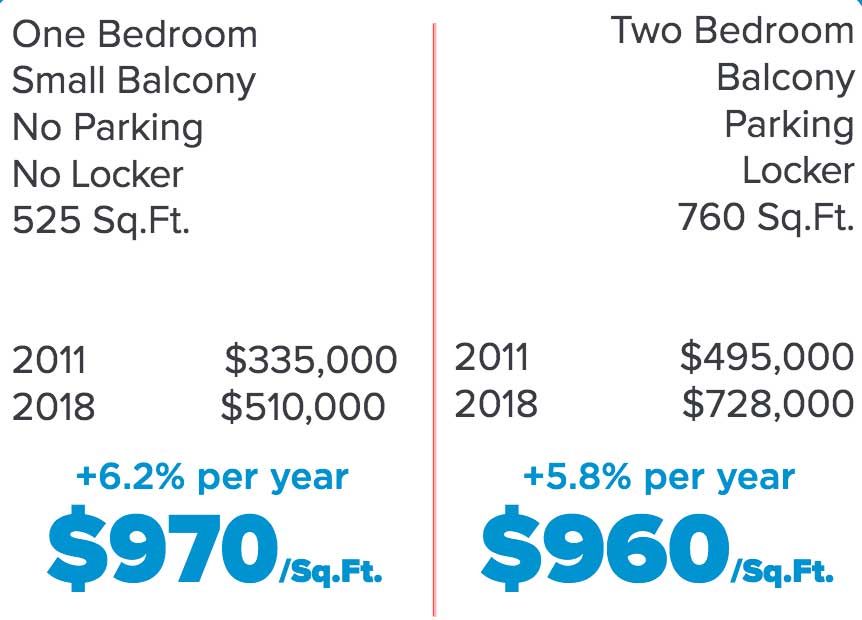 For people who want to be in the centre of the action, Maple Leaf Square was registered in 2010. Connected to the Path, the ACC (now Scotiabank Arena), and with a 100% walk score, it definitely is for Gen X and Y. The one-bedroom we tracked has a small balcony, no parking and no locker. On a mid-level floor of the building, it sold first in 2011 for $335,000. It resold in 2018 for $510,000. At 525 sf, that is a price of $970/sf. Over seven years, this unit has appreciated at 6.2% annually. The second unit we tracked was a two-bedroom, two bath unit with parking and balcony. Located on a mid-level floor, it also sold in 2011 for $495,000 and again in 2018 for $728,000. At 760 sf, that works out to $960/sf. Over seven years as well, the annual increase was 5.8%. The two buildings at 55 and 65 Bremner have 872 units and there are seven units for sale – all in the $1,000/sf range. While we have seen a 20% increase in prices over the last two years, one can also see, by the average annual increase, that there have been years with no or minimal increases. Real estate is very difficult to time the market but holding over a longer period of time will always produce good returns.

This chart plots monthly MLS® Sales for the current year and the previous three years. The recurring seasonal trend can be examined along with comparisions to previous years for each month. Source:The Toronto Real Estate Board